Community News stories on this page include:

A list of other recent ATDD Outreach events can be found here.

Cody Carden, ATDD contract custodian, was awarded a Certificate of Appreciation from his employer Goodwill in recognition of his dedication, hard work, and going above and beyond in his efforts to keep the research and engineering facilities clean and tidy. Dr. Bruce Baker, Division Director, stated that “his efforts are laudable and invaluable to the mission of this division and to NOAA.” 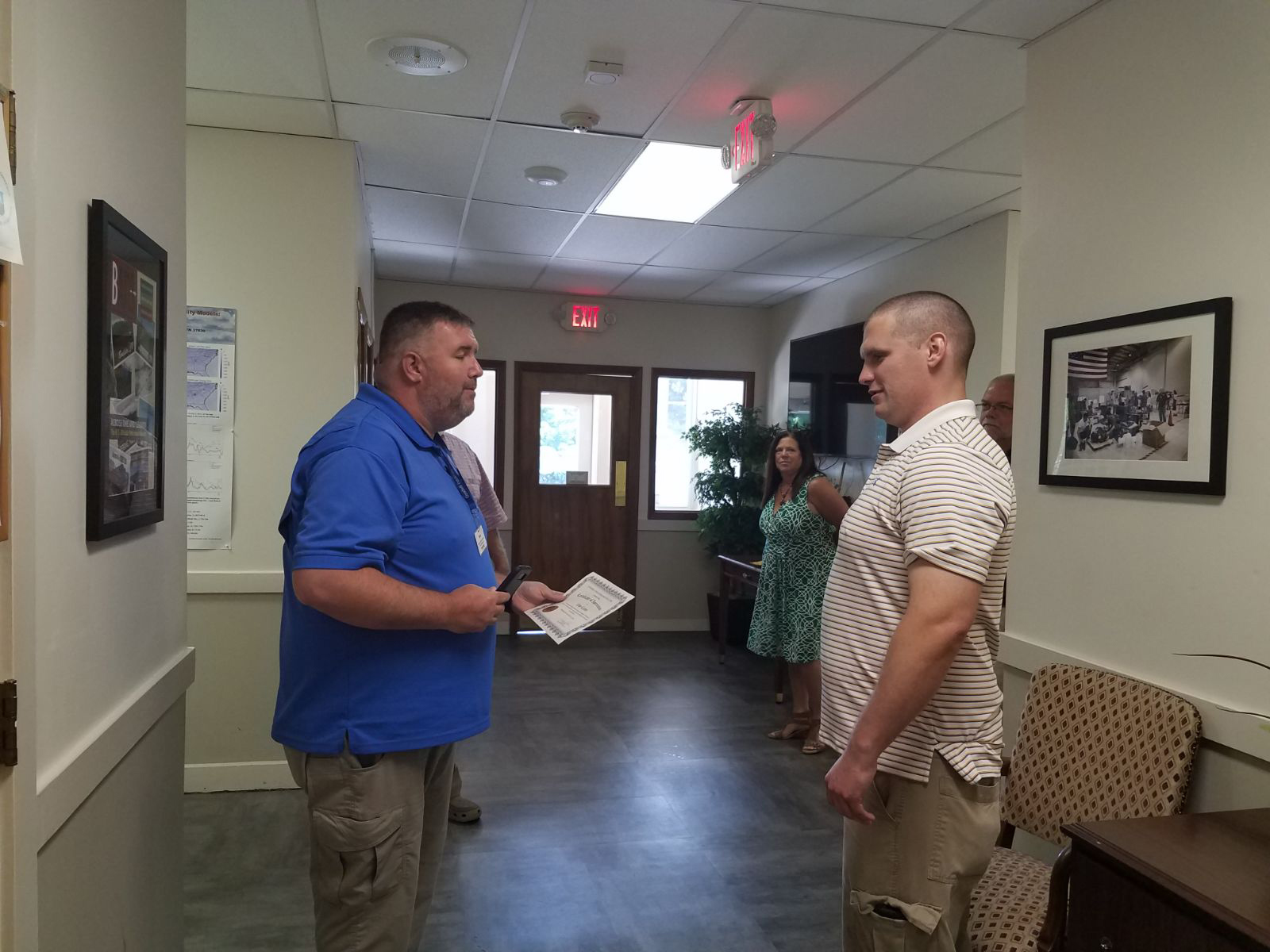 Mr. Ryan Sandlin of Goodwell presents Cody with his Certificate of Appreciation. 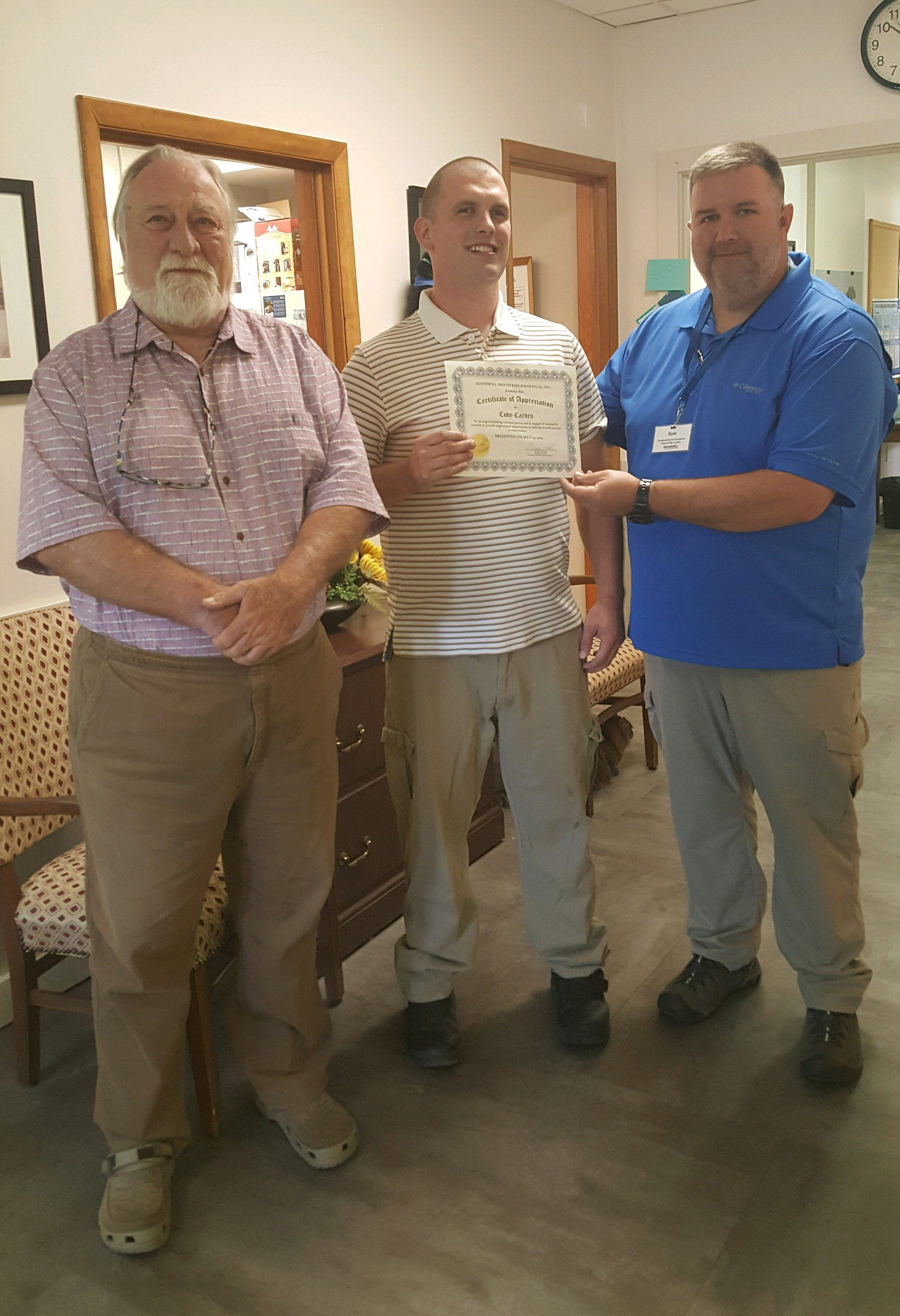 On Monday May 13, 2019, Ed Dumas, Michael Buban, and Temple Lee visited the seventh and eighth grade STEM classes of Todd Livesay and Eli Manning at Robertsville Middle School in Oak Ridge and gave a presentation about NOAA and launched a weather balloon. Ed, Temple, and Michael went back on Thursday, May 16, 2019 and explained the data collected by the balloon and answered the student’s questions.

The Robertsville STEM class is involved in the design and construction of a 2U CubeSat which is slated to launch in 2020. The purpose of the CubeSat is to make pictures of the region around the Gatlinburg area to monitor regrowth of the forest since the devastating forest fire of 2016.

On May 13, 2019, LaToya Myles, Mark Heuer, Michael Buban, and Temple Lee visited third grade students at Amherst Elementary School to give an overview presentation about NOAA, give an instrument show-and-tell, and launch a weather balloon (which the students named Marshmallow). 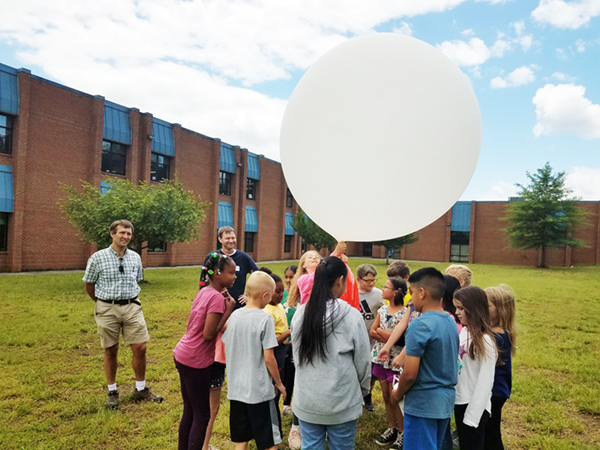 A group of approximately 50 homeschooled students and their parents from several East Tennessee cities and towns visited the ATDD facility on November 14, 2018, for one of their “Wide World Wednesdays” field trips. The students, ages 5-11, learned about current NOAA research at the lab and engaged in hands-on activities, including graphing wind speeds, measuring thermal and infrared temperatures and rainfall. 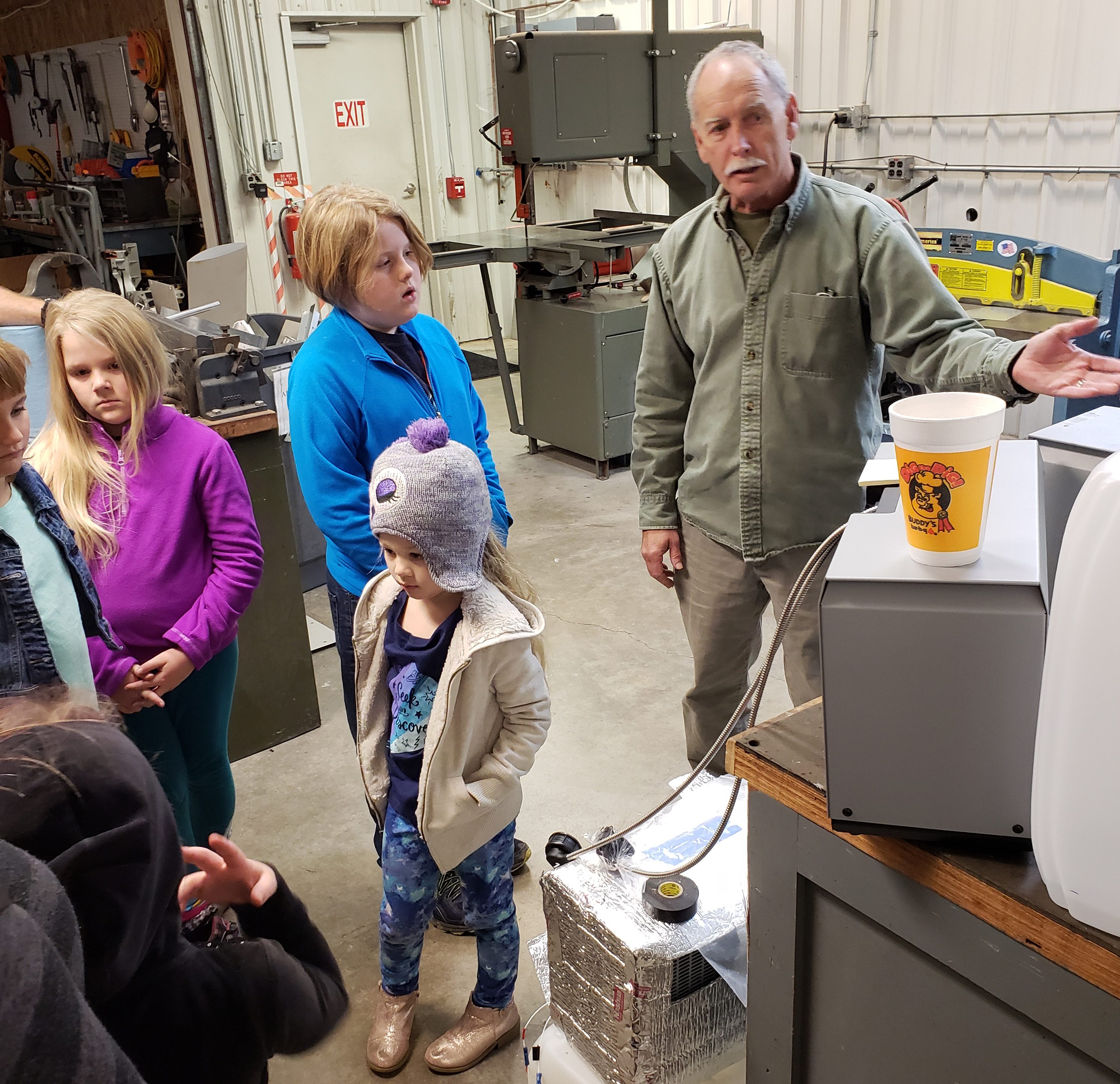 Michael Black, a USCRN engineer, shows students the Methanol Fuel Cell Generator which is needed as an alternative power source at some of the Alaska climate stations due to their remoteness from conventional electrical resources and the lack of sunshine during the winter months. 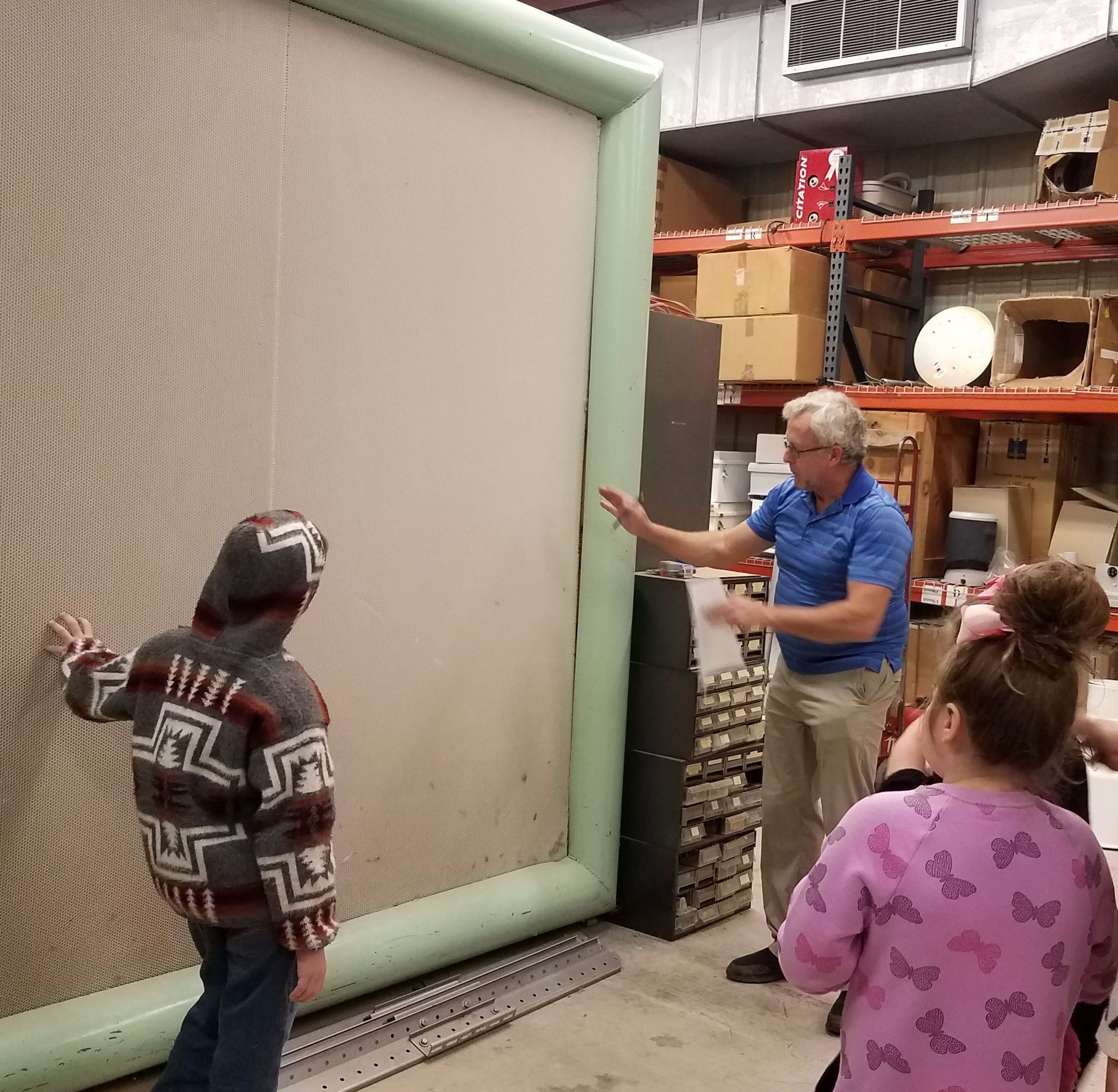 The students learned from ATDD Engineer Randy White, how in a wind tunnel, airflow needs to be very uniform and parallel as it flows through the inlet. An open circuit wind tunnel, such as the one at ATDD, utilizes a white honeycomb structure, that is like thousands of 6 inch long soda straws. This forces the airflow to become parallel after twisting around the green corners. The relatively small diameter of the straws are useful in breaking any large eddies into small eddies and decreasing turbulence of the air entering the wind tunnel. 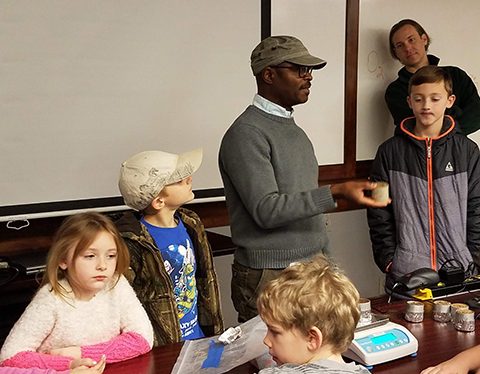 Dr. Tim Wilson, a soils researcher, explains how soil is not “dirt” as some people tend to think of it. Instead, the soil is a critical natural resource that deserves studying, understanding and managing. The soil is not dormant; it is an active system that changes and interacts with the rest of the environment. The water content in the soil is one factor that changes continuously depending on rainfall and radiation conditions. Soil water is important to support plants and to recharge ground water, streams and rivers. One way to quantify the soil water is by analyzing soil samples, such as the one Tim is holding in the photo, that are collected in the field.

Daughters and Sons to Work Day

ATDD hosted the first Take Our Daughters and Sons to Work Day on June 6, 2018. While the nationwide event is usually held in April at other NOAA facilities, ATDD decided to hold the event after school had let out for summer break to allow for more participation. The staff’s children and grandchildren were invited to participate in a variety of indoor and outdoor activities. Fifteen children attended the event, which was thoughtfully planned by a three-person committee hoping to show the fun and excitement of science while facilitating new friendships.

The day’s agenda included numerous activities designed to showcase ATDD’s research and development efforts in the fields of air quality, dispersion, and climate science. ATDD’s Director, Dr. Bruce Baker, welcomed the children to the lab, after which the US Climate Reference Network (USCRN) team gave a guided tour that included the wind tunnel, instrument shop, and a prototypical USCRN station. Other inside activities included an explanation of instrumentation, including a size-to-size comparison of new and old technology ranging from weather station instruments to computers, a briefing on the characteristics and uses of two small unmanned aerial systems, the chance to conduct “speed interviews” with four ATDD scientists, and a special guest appearance by a member of the weather team from the local Knoxville, Tennessee, TV station WATE, who explained how ATDD’s research is being put to use in forecasting weather events.

Outside activities included weather-related chalk drawings, assembly of a colorful cloud creation during craft time, and an ice cream social. The launch of a weather balloon was the highlight of the afternoon’s events.

The kids (and the staff) enthusiastically enjoyed the day! Before leaving, several children asked when the next event would be held, something that everyone at ATDD will be looking forward to with great anticipation. 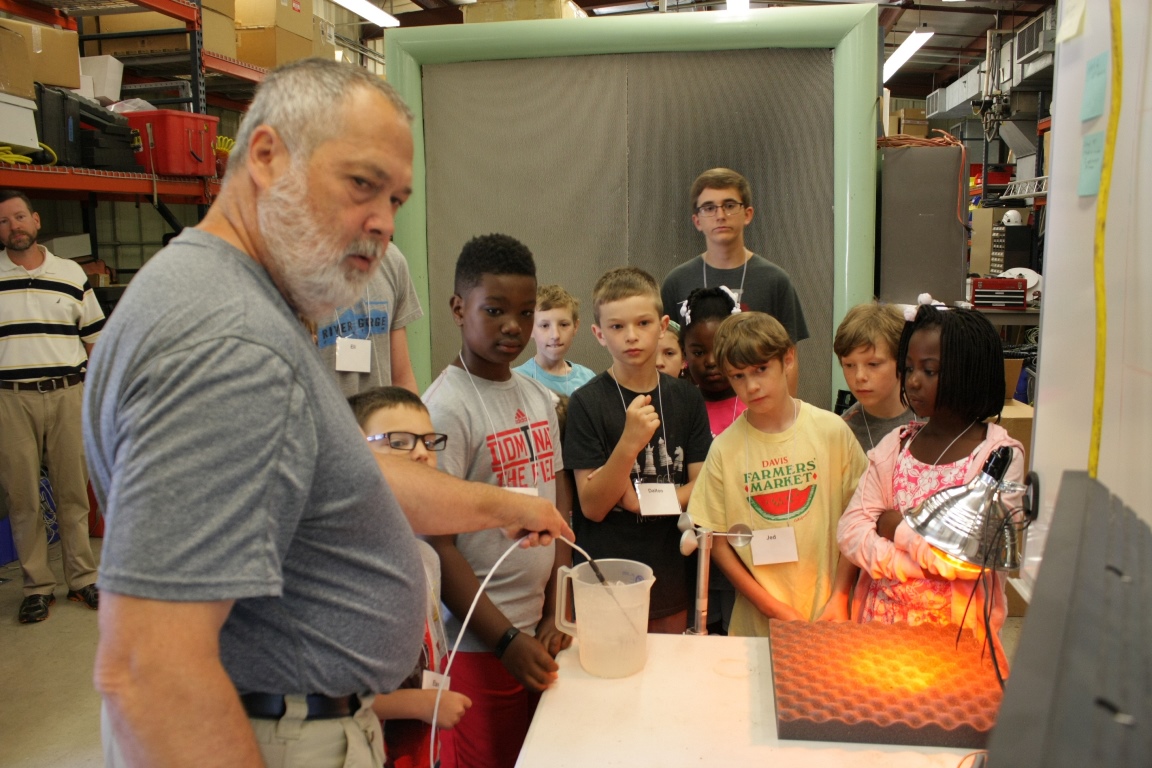 Dr. LaToya Myles showing the circuitry and equipment in a data logger box bound for
a new Climate Reference Network site in the Yukon Delta of Alaska

There are more pictures in our Photo Gallery.

On April 13, 2018, 20 8th-grade students and 5 teachers from St. Mary’s School in Oak Ridge, Tennessee, visited the ATDD facilities. Lead by Mick Wiest of the Oak Ridge Heritage & Preservation Association, they came to learn about the history of the ATDD building as part of a tour of Oak Ridge historical sites.

John Kochendorfer and Michael Potter gave them a tour of the facilities, and showed them a US Climate Reference Network (USCRN) station being assembled on the ATDD grounds in preparation for deployment to a site in the Yukon Delta of Alaska (see map in sidebar). In addition to receiving a history of the building, John and Michael also provided a brief overview of the history and research programs carried on at ATDD which is a division of the Air Resources Lab. 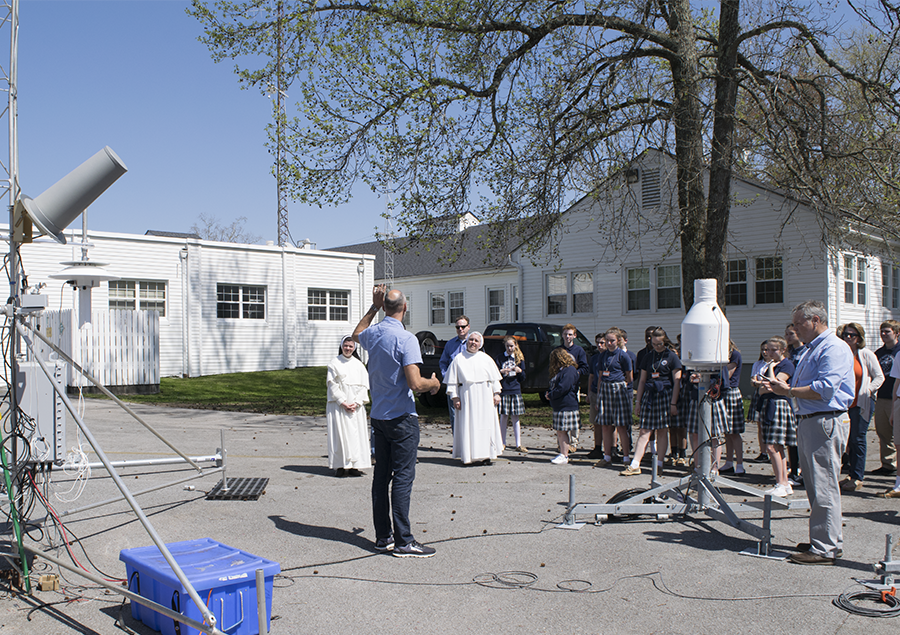 John talks about some of the history of ATDD

On March 28, 2018, two schools in the local area, Eaton Elementary School in Lenoir City and Rockwood Middle School in Rockwood, Tennessee were visited by ATDD staff.

LaToya Myles and Randy White visited Eaton Elementary School and made presentations to approximately 80 students in 3rd and 4th grade. They explained NOAA’s Mission and Vision for the future.

Randy showed the students some of the instruments used in gathering information about the environment upon which researchers can do studies into drought, precipitation, temperature, and air quality.

Instruments carried by the balloon measured temperature and humidity with the rawinsonde and, as there was an on-board GPS, were able to derive wind speed and direction during the balloon’s ascent. The balloon released during the visit went to 8.3 km (about 5 miles) above the surface before the sounding was stopped. Balloons can go to twice that height and depending on conditions, the balloon will travel 50-100 miles from release location and thus they are not retrieved. 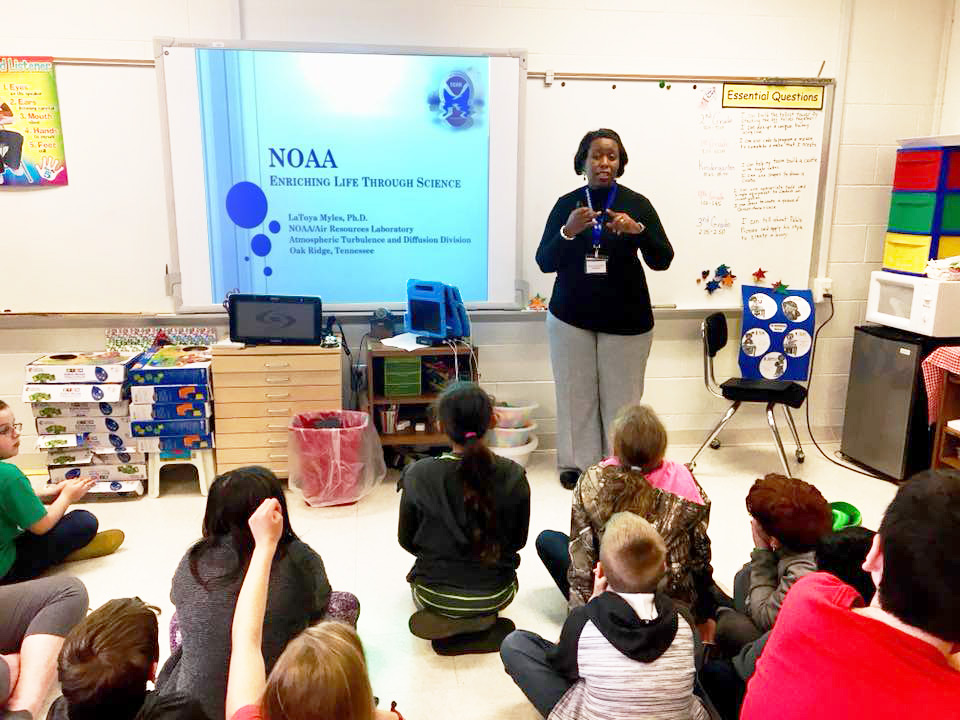 ARL/ATDD in Oak Ridge, Tennessee, was located in the path of totality for the solar eclipse on August 21. Students from Linden Elementary School in Oak Ridge went on a field trip to Roane State Community College in Harriman, Tennessee, where scientists and engineers deployed a meteorological tower. The instruments and sensors measured solar radiation, wind speed and direction, air temperature, and other variables. A similar suite of equipment and sensors was set up at on a local farm near Philadelphia, Tennessee. Data collected during the eclipse is available in .csv format.
Average 5 minute data
1 second data

The solar eclipse “totality” began at 2:32 p.m. and lasted 2 minutes and 3 seconds (give or take a couple of seconds).

You can read more about the eclipse here. Top of page

Eclipse as seen in Bowling Green, KY
(click on image to enlarge)

Science Students get “blown away” in ATDD wind tunnel facility

Please note that all links in this article are to websites outside the .gov domain and open in separate pages

On July 20, 2017, ATDD hosted the Wind Energy team from the Appalachian Regional Commission (ARC)/ORAU Science Academy. They visited the ATDD wind tunnel facility to have their model wind turbines tested. The team was comprised of nine students from eight different Appalachia states. This is the seventh year ATDD has participated in this annual event.

The Academy is a week long, in-residence camp that ran from July 16 to July 21.

The Wind Energy team was lead by Lauren Wilmoth, a STEM and Honors Biology teacher at Oak Ridge High School, and Mark Rubin, a middle school teacher from Maryland.

The students pictured below are: 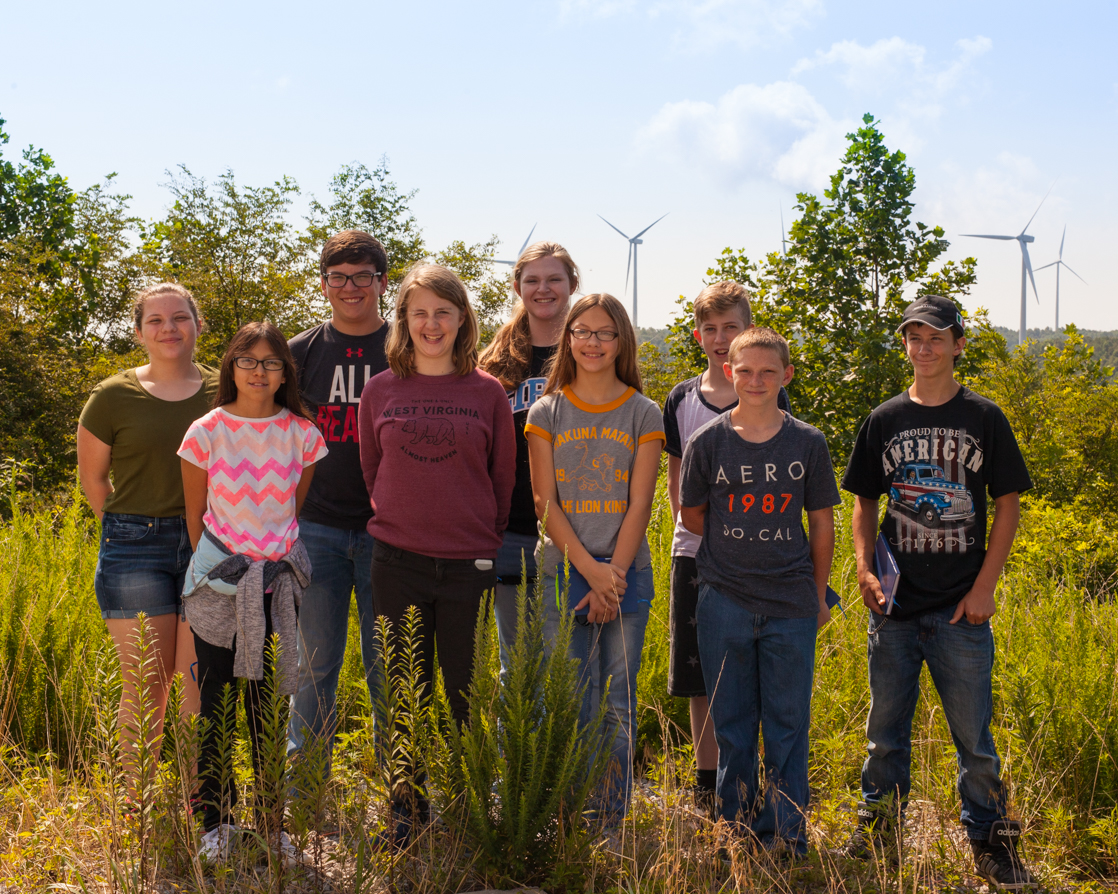 You can read more about the 2017 ARC/ORAU Science Academy here.

A flickr album of photos of the week long event can be viewed here. Top of page

Top of page
Go to Top