Working with universities and other Federal agencies, Researchers at ATDD quantify the extent to which changes in emissions affect air quality and pollutant removal at selected locations around the US. ARL also performs field studies to investigate the processes that influence the exchange of reactive nitrogen and other compounds between the atmosphere and land surface, with a focus on a variety of land use types. The results of these measurements and the improved scientific understanding of the processes that influence the exchange rates can be used to improve computer models of these compounds on local and regional scales. Projects described below include the Surface Energy Budget Network,  and the Flux Observations of Carbon from Airborne Laboratory (FOCAL) campaign in Alaska, and reactive nitrogen measurements. 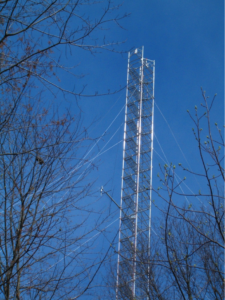 The Surface Energy Budget Network, or SEBN, is a field experiment to measure fluxes of energy, water, and carbon dioxide at the air-land interface to improve understanding of the Earth’s surface energy balance. This network consolidates several independent but closely related observing systems into a single, cost-effective and efficient network. SEBN seeks to explain why climate variables (e.g., air temperature, precipitation) have changed. It is this energy balance that drives weather, climate, and ocean circulation, and therefore must be accurately reproduced in climate models in order for decision-makers to make sound choices regarding environmental and economic policy. Accurate understanding and simulation of Earth’s energy balance is also important for weather prediction, including short-term and seasonal predictions of water resources. Currently, NOAA has three SEBN stations in operation to cover representative eco-regions (forests, grasslands, crops, etc) in the US: Audubon in Arizona a grassland field; Bondville, IL, a corn and soybean field; and Chestnut Ridge, TN, a forest of Hickory, Oak and Maple trees. Data, which includes the input of moisture and heat to the atmosphere, are used by NOAA scientists to provide detailed examination of the land-surface feedbacks and related radiative processes that can drive regional climate and to improve weather predictions. 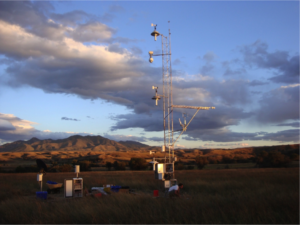 SEBN tower at Audubon field in Arizona, a grassland region.

The SEBN supports NOAA’s mission of providing high-value routine measurements of surface energy, water, and carbon budgets along with other climate variables in regional vegetation systems across the continental United States. The objective of the SEBN is to provide data that will improve predictions of water (precipitation, soil moisture, evapotranspiration) from days to months by focusing on a predictive understanding and response of the land surface to significant climate events for major land-use types in the U.S. SEBN data are used by NOAA’s National Centers for Environmental Prediction (NCEP) Land Surface Modeling group for testing and evaluation purposes. Other uses of SEBN data include: (i) improved parameterizations of the land surface model physics that ultimately improves seasonal predictability of water resources; (ii) better understanding of the critical land surface processes that control the seasonal and annual water and carbon budgets for various ecosystem types and the impacts of extreme climatic events on the land surface responses; and (iii) supporting validation efforts for NOAA’s new water initiative. 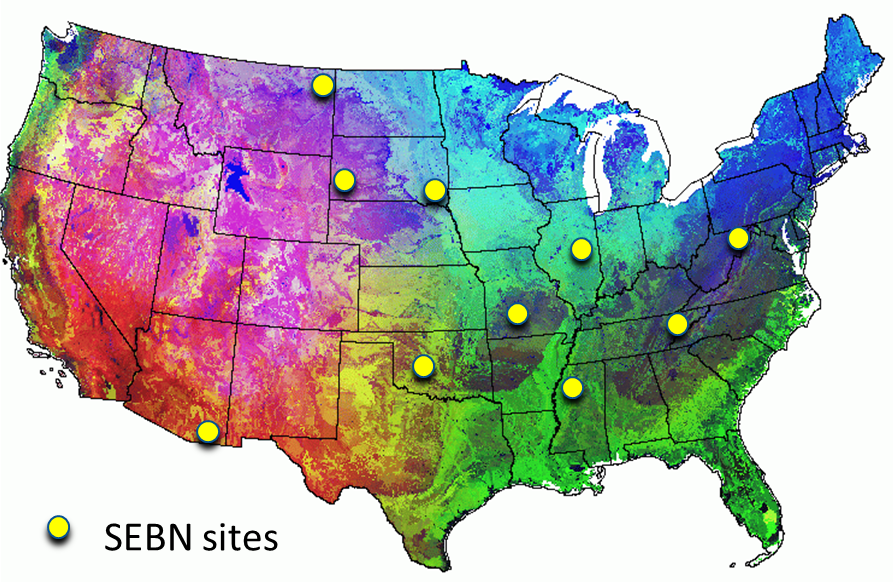 The ATDD team, Tom Wood, Praveena Krishnan, Dominick Christensen, and Mark Heuer, after the successful installation of the FOCAL site 2 in fall 2022. the inset shows locations of the sites.

Accurate forecasts of greenhouse gas emissions are critical inputs to global models that predict changes to temperature and to sea level. Our regional and global scale climate models require a better understanding of methane and carbon dioxide sources to gain insight into how the change will vary in a warming Arctic. For the FOCAL campaign, a small aircraft will provide emission measurements of CO2 and CH4 plus nitrous oxide (N2O), and water vapor (H2O) from the North Slope of Alaska. Operating at low altitudes from 10 m to 10 km, the aircraft has custom-built spectroscopic sensors, an air turbulence probe, and GPS systems. The goal of this project is to bridge the scale gap between local studies of carbon emissions in the Arctic, such as those from flux towers, and large regional scale emissions estimates from inversion modeling. The work provides resolved emissions correlated with underlying sources; regional coverage for comprehensive analysis of carbon emissions in this part of the Arctic basin; direct coupling of the observations with other observing systems ranging from small tower measurements to satellite remote sensing; and coupling of the observations to an air transport model to compare direct emission measurements to top-down estimates of regional emissions based on profile measurements in the atmosphere. Specifically, aircraft eddy covariance measurements and vertical profiles are used to effectively scale process measurements from short eddy covariance towers to the regional scale, allowing for determining how representative certain areas are of the larger North Slope with respect to flux of the major gases that contribute to changes in radiative forcing. 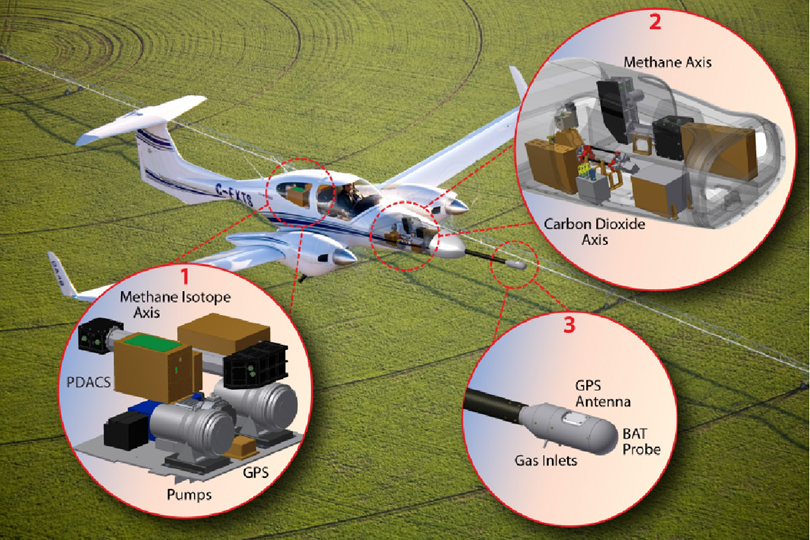 A BAT probe installed on an aircraft flies over the flux measurement tower near Prudhoe Bay, Alaska. The aircraft measures fluxes of carbon dioxide and methane.

The complex terrain of the North Slope offers a wide range of Greenhouse Gas emission sources, such as wetlands or thawing permafrost. But scientists have a knowledge gap between ground based studies and large-scale regional estimates from remote sensing data or inversion-model results. FOCAL will fill in missing data on the sources of emissions by providing more insight into ground based measurements and their scalability over the ecosystem. Observations of various molecules reveal clues about the greenhouse source processes at local, landscape, and regional scale, a feature unique to this project. Limited infrastructure for ground-based equipment means that a small aircraft is the best option for large scale measurements. Airborne measurements, especially from low-flying aircraft, can correlate the emissions with the larger landscape. For FOCAL, flux measurements from low-flying aircraft are coordinated with surface measurements, enabling detailed tower surface-flux measurements to be used over a larger regional scale by mapping the correspondence to the flux in larger areas. Comparing aircraft derived fluxes to local tower measurements and land classification maps allows for the determination of which landforms or mechanisms contribute to the variations in emissions. 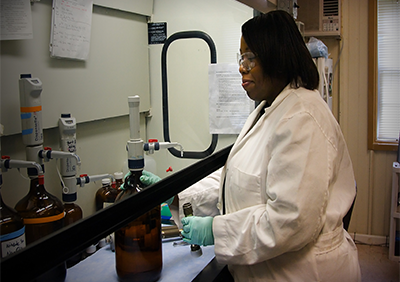 Dr. Myles coating the inside of a sampling tube to capture basic gases from the atmosphere

Observations and modeling of fluxes and concentrations of molecules that differ in their isotopic composition reveal the contributions of key source processes at local, landscape, and regional scale, a feature unique to this project. This project creates an analysis framework to allow for the combination of in situ concentrations and fluxes with regional fluxes calculated using a transport model that both is adapted for Alaska and widely applicable to other circumpolar areas. 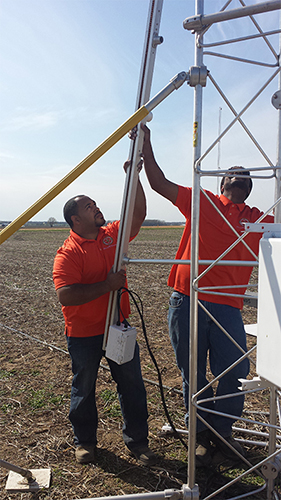 An overabundance of nitrogen results in a number of harmful environmental conditions (e.g., acidification of coastal waters and biodiversity decline in forests) that can negatively impact communities. Ammonia, the dominant form of reduced reactive nitrogen, readily deposits from the atmosphere under certain conditions, but exchange rates are highly uncertain and difficult to measure and model over time and distance due to its bidirectionality. ATDD scientists conduct: 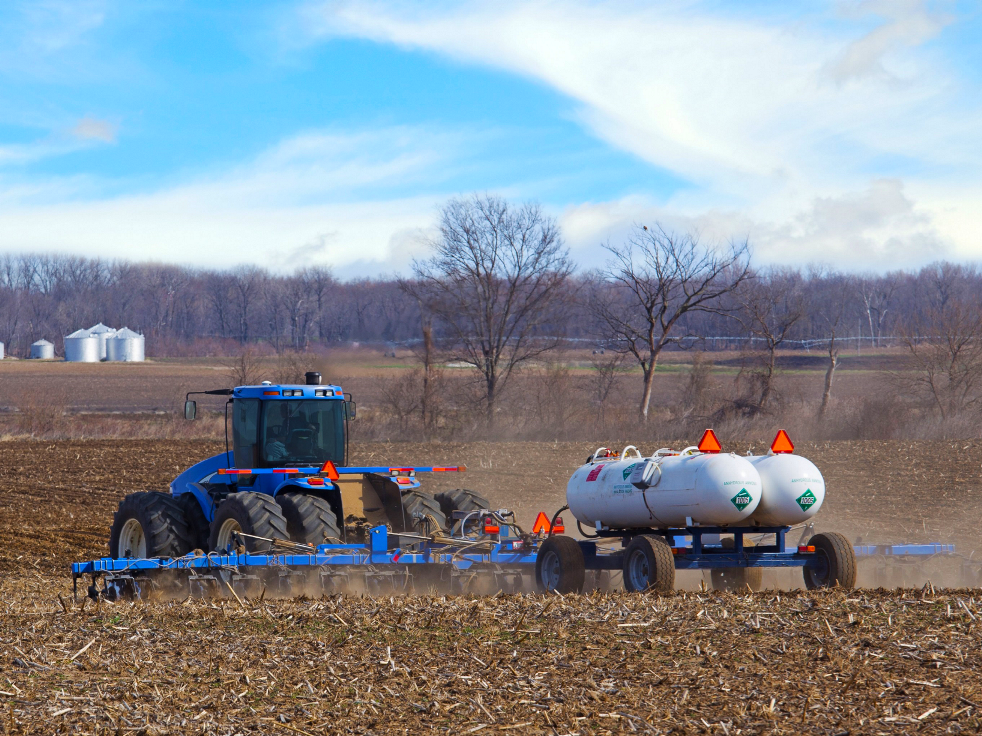