Airplanes open the spatial dimension of the atmosphere to observation in a highly versatile, three-dimensional way. Particularly fruitful is the study of air-surface exchange through the atmosphere’s boundary layer.  The lowest several hundred meters of air is characterized by turbulence, a chaotic, three-dimensional flow that transports mass, momentum, and energy both upward and downward. Things such as heat, water vapor, O2, and other gases are exchanged between the atmosphere and the surface below, whether land or sea. Since such exchanges drive both the weather and the climate, understanding them is critical to improving both short-term and long-term forecasts. Airborne turbulence measurements are valuable away from the boundary layer as well. Clear-air turbulence in the upper troposphere is important to aviation and military operations. Atmospheric thermals and the three-dimensional wind field around them are important to air-pollution dispersion and to mesoscale weather forecasting.

Wind is measured from an airplane by measuring the airflow relative to the wind sensor and subtracting the wind sensor’s motion relative to Earth. Since the airplane flies at least ten times as fast as the wind, these two large vectors must be accurately measured and subtracted, leaving the wind vector as a small residual. Obtaining research-grade measurements of atmospheric turbulence from an airplane is thus a demanding task. Over the last fifty years, multiple instrument configurations have been used. In the most successful, relative wind was derived from the pressure distribution on the airplane’s nose cone, while the airplane’s motion was determined by an Inertial Navigation System (INS).  This required that the nose cone’s motion had to be inferred from the airplane’s INS information. These systems involved complex, heavy, and expensive components, usually built into the structure of a dedicated airplane. Ease of replication was not a design criterion. Furthermore, such systems were unsuitable for small inexpensive airplane. Efforts with mechanical gyro systems and flux-gate-magnetometer compasses in small airplanes gave marginal performance. Since about 1990, however, technological developments in all aspects of airborne turbulence measurements have completely changed the situation.

The “Best” Aircraft Turbulence (BAT) probe is a joint effort by NOAA and Airborne Research Australia (ARA) to develop a generic airplane-based wind sensor. The acronym derives from the shape of the probe, which resembles a baseball bat. The purpose of this design is to extend the sensor head forward from the airplane into a region of minimal flow disturbance. The full name reflects a commitment to continuing excellence in turbulence measurement. The system was conceived by Tim Crawford in the late 1980’s and initially developed by his team at ATDD. It has been in operational use since 1989 over which time its design has evolved to improve accuracy, modularity, and duplicability. The current version is in use worldwide.

The latest application of the BAT probe is on the Flux Observations of Carbon from an Airborne Laboratory (FOCAL) project, which is a cooperative effort among the Anderson Group from Harvard University, Aurora Flight Sciences, and NOAA/ATDD to add scientific instruments to a Diamond Aircraft DA-42 Twin Star to measure fluxes of CO2 and CH4 in the planetary boundary layer on the North Slope of Alaska.  The work, funded by the National Science Foundation in 2012, uses the Anderson Group’s Integrated Cavity-Output Spectroscopy (ICOS) instrument suite to measure concentrations and isotopologues of CO2 and CH4, NOAA/ATDD’s BAT probe to measure atmospheric turbulence in 3-dimensions, and Aurora Flight Sciences’ DA-42 to carry the complete instrument package.  Validation of the BAT probe measurements was performed by flying the airplane by a ground-based tower at low altitude.  This flight path allowed nearly direct comparisons of the turbulence and gas concentration measurements from the airplane to be made against reference instruments located on the tower.  The DA-42 collected 36.9 hours of research data based from Deadhorse Airport in Prudhoe Bay, Alaska in August, 2013. 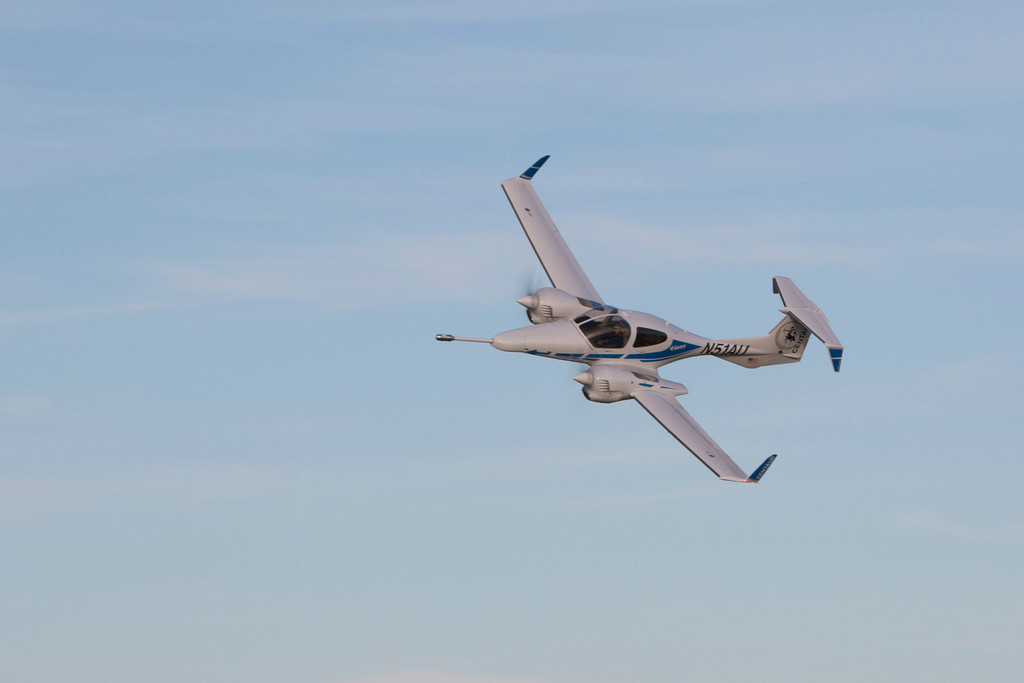 The Diamond Aircraft DA-42 Twin Star with BAT probe mounted on the aircraft’s nose to measure CO2 and CH4 fluxes. 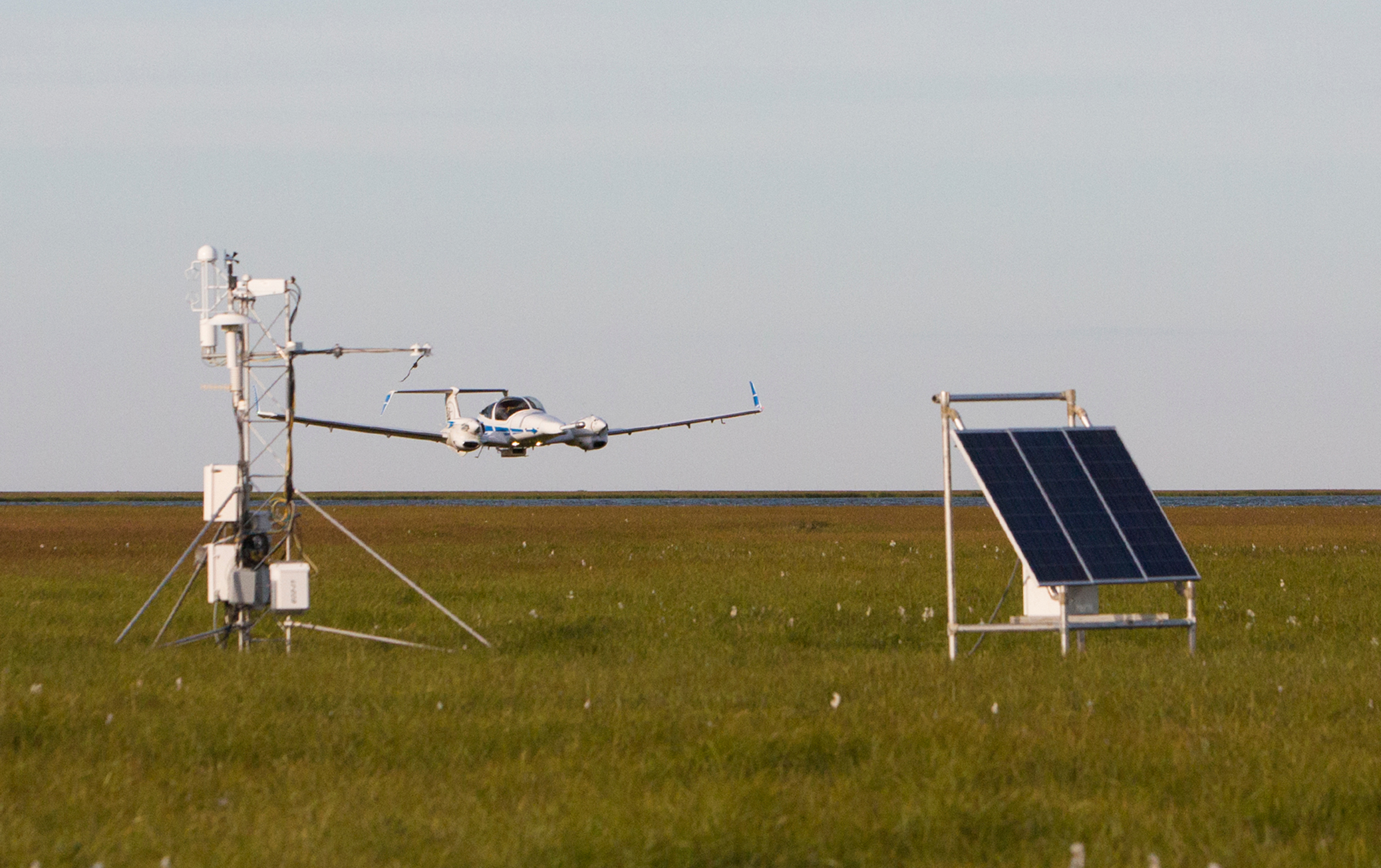 The DA-42 performing low-level measurements near the ground-based flux tower for validation purposes.